Due to the tight space and time constraints, athletes without any prior Heavy Events experience cannot be permitted to compete. Competitors are selected by the coordinators of the event 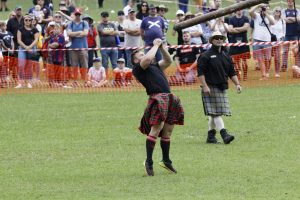 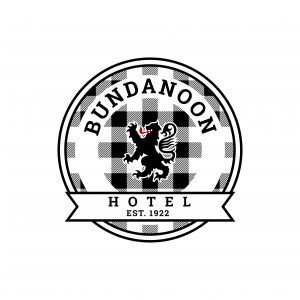 BRIGADOON WOULD LIKE ACKNOWLEDGE THE GENEROSITY OF THE SOUTHERN HIGHLANDS PUB GROUP-BUNDANOON HOTEL (https://www.bundanoonhotel.com.au/ ) FOR BECOMING PLATINUM SPONSORS FOR THE AUSTRALIAN HIGHLAND HEAVY WEIGHT CHAMPIONSHIPS FOR 2022

This was an outstanding field of heavy weight competitors, so the competition was fierce

After a very close fought event it came down to the final challenge Weight over the Bar, it all hinged on this to select a final winner

Terry Sparkes QLD East Coast and Hororata Champion Still new to the sport but so far: 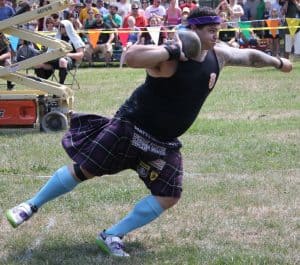 Stone Put This event resembles the modern day shot-put but with a 16-18lb (7-8kg) stone picked from a local river. The throw takes place from behind the “trig” or toe board and is thrown for distance. There are several different throwing styles that can be used including the glide or spin. The throw is recorded by measuring the distance from the back of the trig to the mark the stone makes when it hits the ground. Each competitor is allowed three attempts with the best throw   being recorded for the final score. 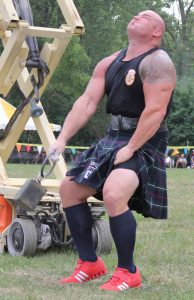 56-pound (25kg) Weight for Height In this back breaking event, the athlete tosses a 56lb(25kg)  weight over a cross bar. The weight is tossed with one hand only from a standing position and the athlete is allowed three tries at each height. The bar is raised until only one athlete remains. Top professional athletes can toss the 56lb (25kg) weight over a bar 18 feet (5 metres) off the ground! 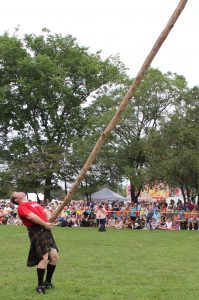 Caber Toss The Caber toss is considered the signature event of the Heavy Events. The Caber is generally log measuring about 20 feet (6 metres) long and weighing approximately 150lbs (68kg) 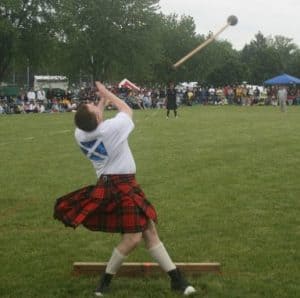 Hammer Throw. The Scottish Hammer is a spherical, metal ball weighing 16 or 22lbs (7-10kg) that is fastened to the end of a wooden handle and is thrown for distance. The athlete has his back facing in the direction of the throw. He is not permitted to spin, and anchors his feet to the ground using long blades fixed to the bottom of his boots. This allows him to stay grounded against the tremendous forces from the hammer swinging around his head at high speed. He winds the Hammer around his head as fast as possible and releases it at its maximum speed. Top  professional athletes can throw the 22lb (10kg) hammer over 115 feet (35 metres) 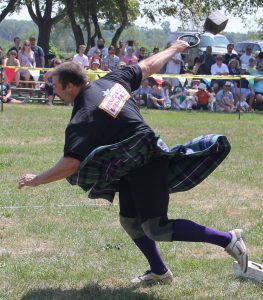 28-Pound (13kg) Weight Throw: This event involves throwing a 28lb (13kg) metal block fixed to a chain and handle with one hand for distance. The athlete must throw from behind the trig. The athlete spins twice and releases the weight at its maximum speed. Top professional athletes can throw the 28lb (13kg) weight over 82 feet (25 metres)

Performed by member of the Kilted Warriors. Competitors are selected by invitation only.